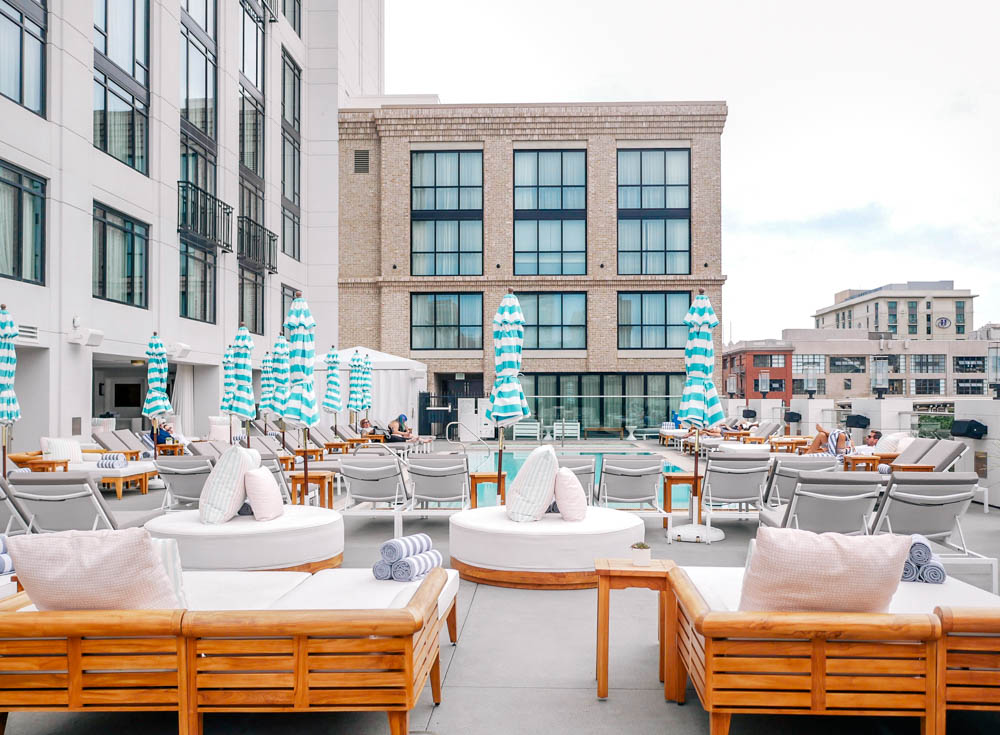 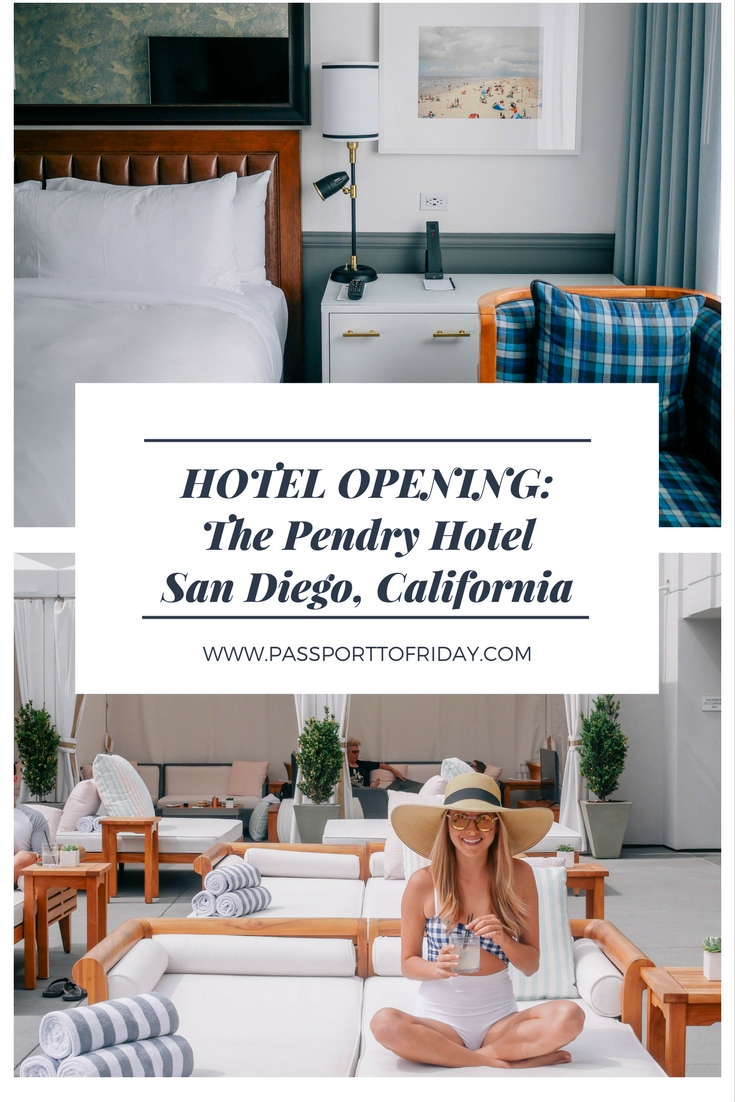 Downtown San Diego has a new hotel on the block, and it sure is a stunner.

The Pendry San Diego is #designgoals and an Instagram dream. Not only is it gorgeous, but it also has the bones  to match. With 317 guest rooms, 6 restaurants and bars, a rooftop pool, full-service spa, on-site nightclub, and more (including being pet friendly), you never even have to leave the hotel!

Another bonus? You’re close to everything with being located in the heart of the Gaslamp Quarter just two blocks from Petco Park, 4 blocks from the San Diego Convention Center, and walking distance to a plethora of the best restaurants and bars.

ALSO ANOTHER BONUS: Book your stay at The Pendry with me and receive:

Check out my stay at the brand new Pendry Hotel in San Diego, California! 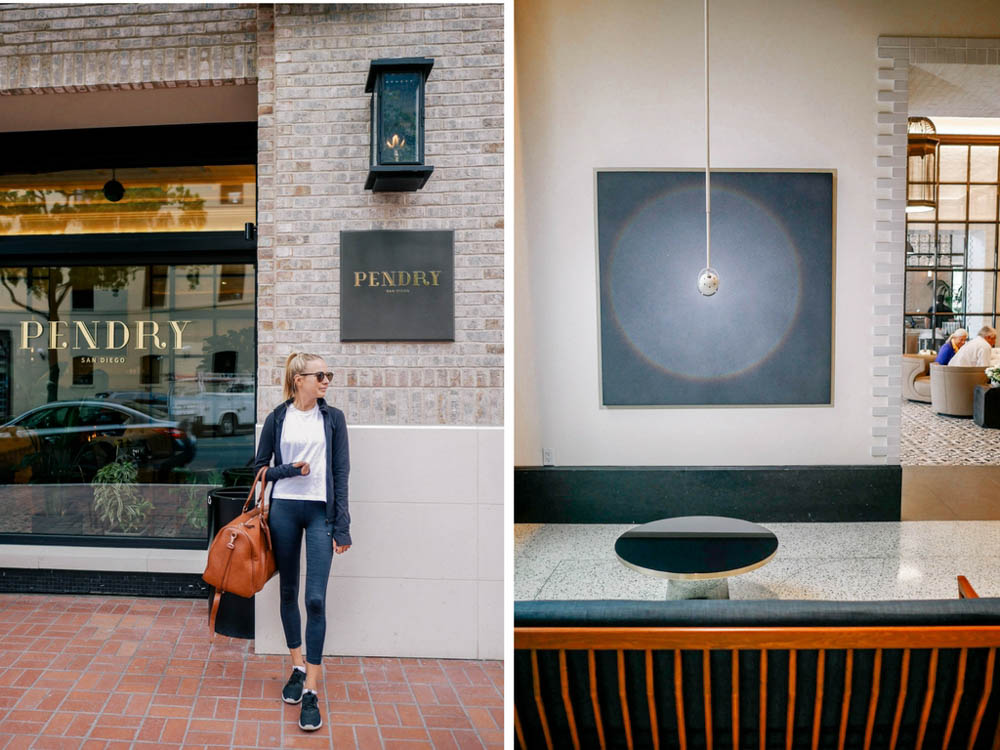 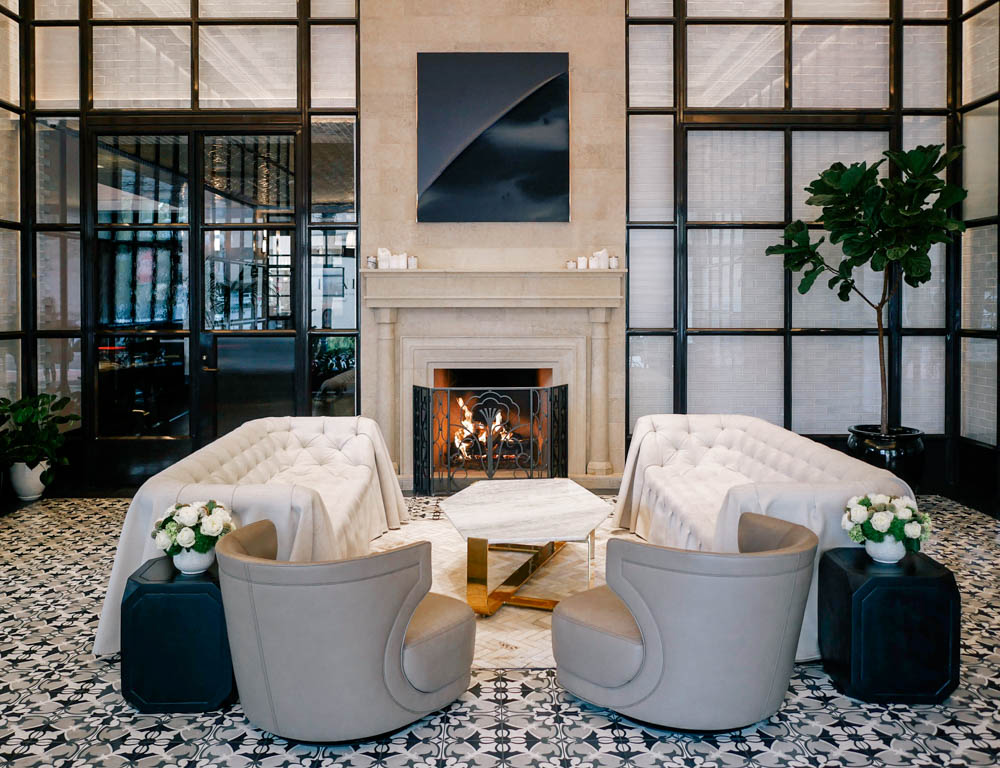 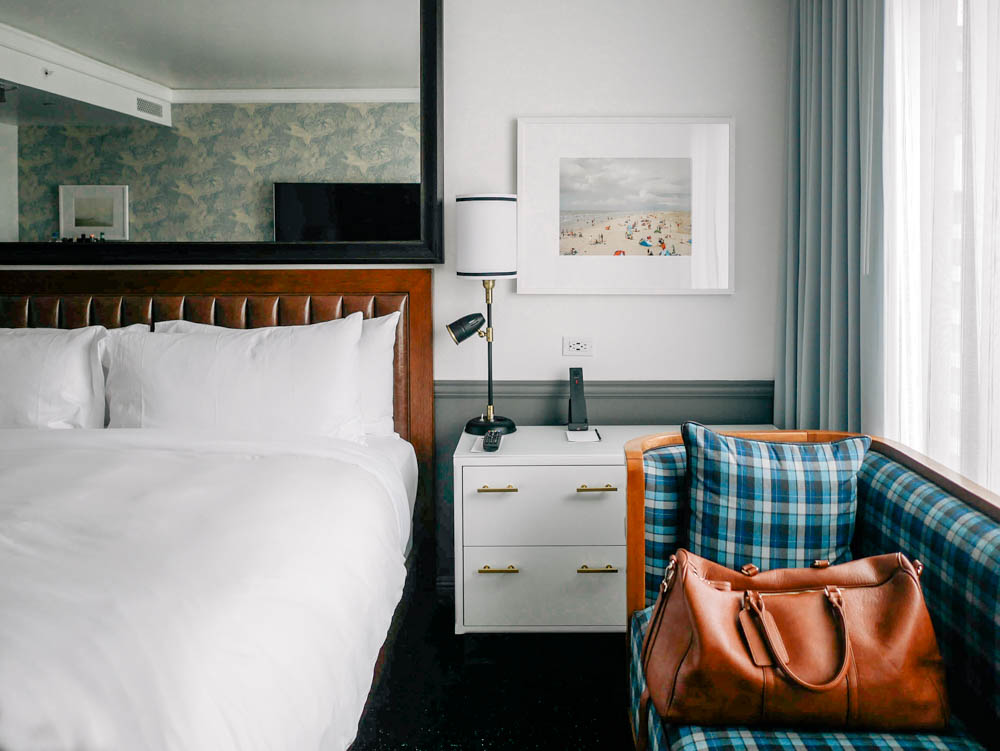 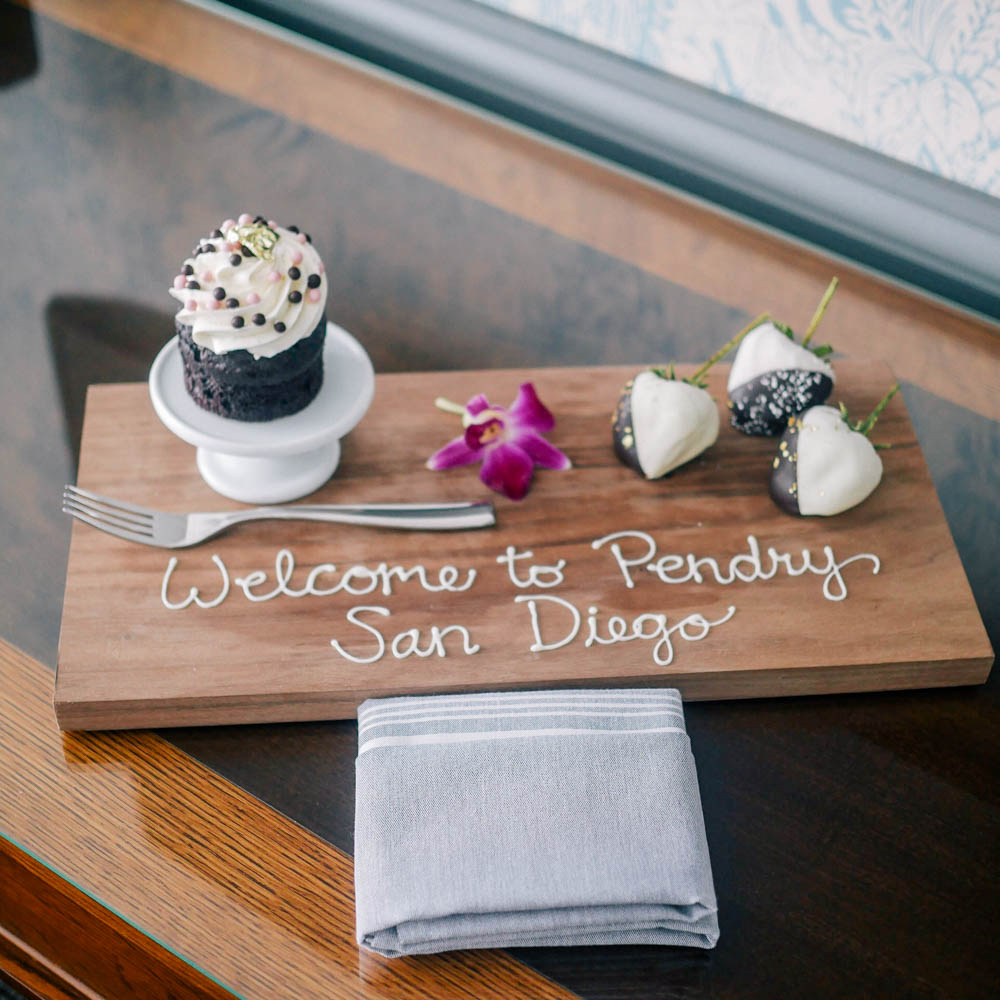 Check In to The Pendry

From the moment I walked in to The Pendry, I was impressed. Every little design detail from the handmade tiles to the striking textiles and gold accents are swoon-worthy. The Pendry also exudes a feeling of modern luxury – fit for both leisure and business travelers alike.

We stayed in a Deluxe Room with a view of Downtown San Diego. The aesthetic of the rest of the hotel spilled into the design of the room as well with a fun checkered blue chaise lounge, textured wallpaper, and subtle elements of San Diego in the beach vibes artwork. The mini bar was fully stocked with the best products (food & beverage, wellness, you name it), and they sent us a lovely welcome amenity (to be followed by local craft beers and chips later in the day!) 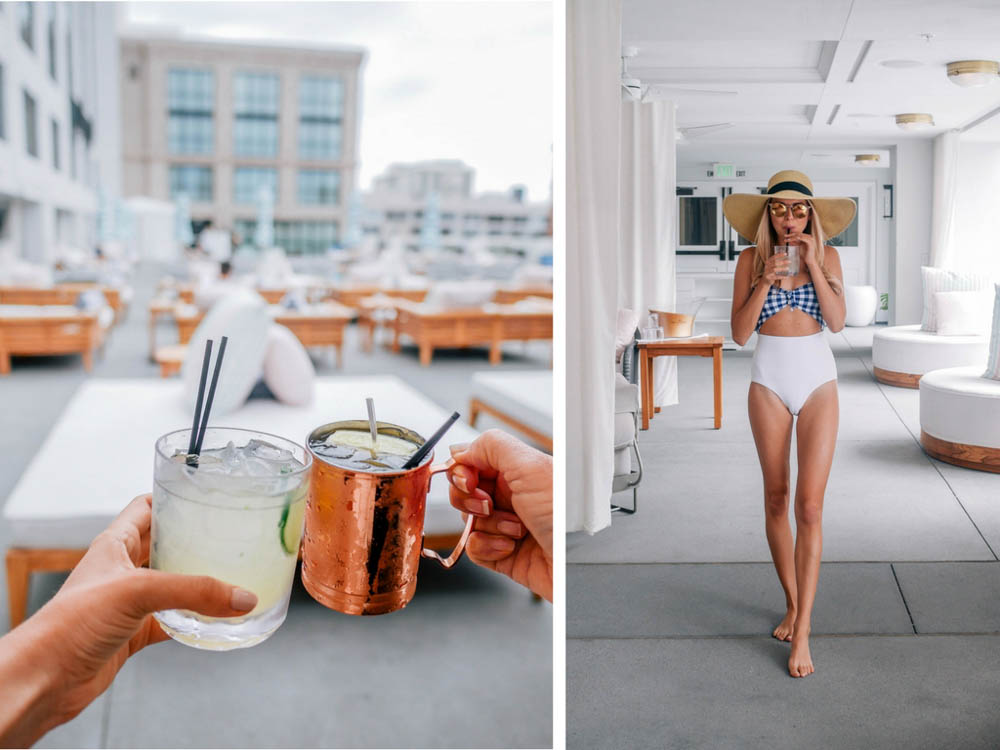 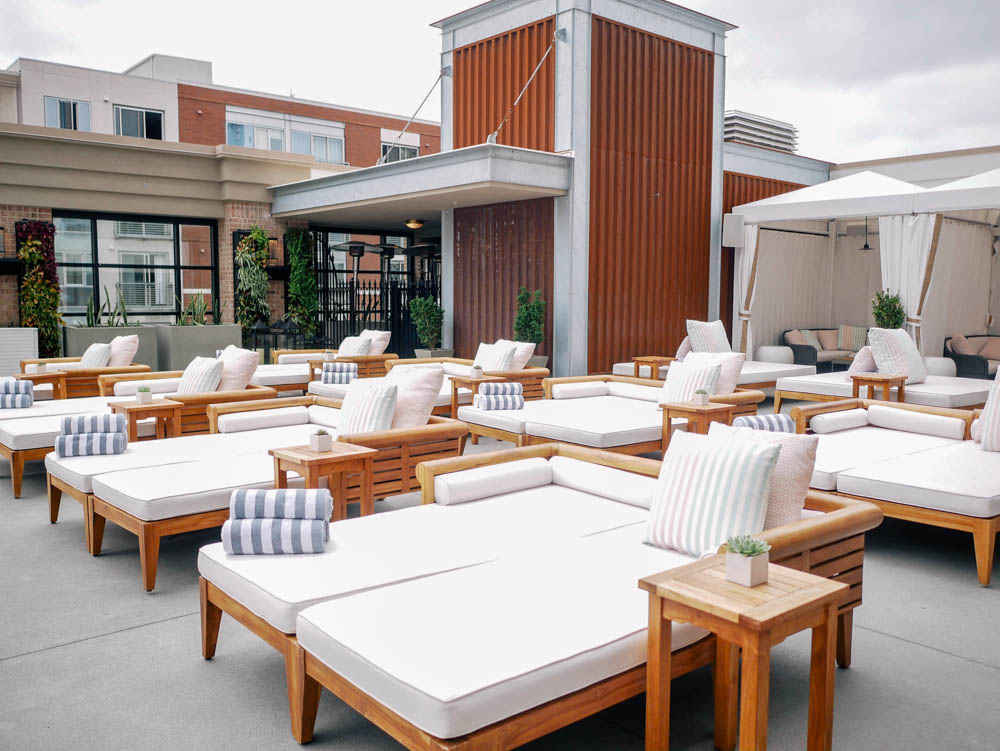 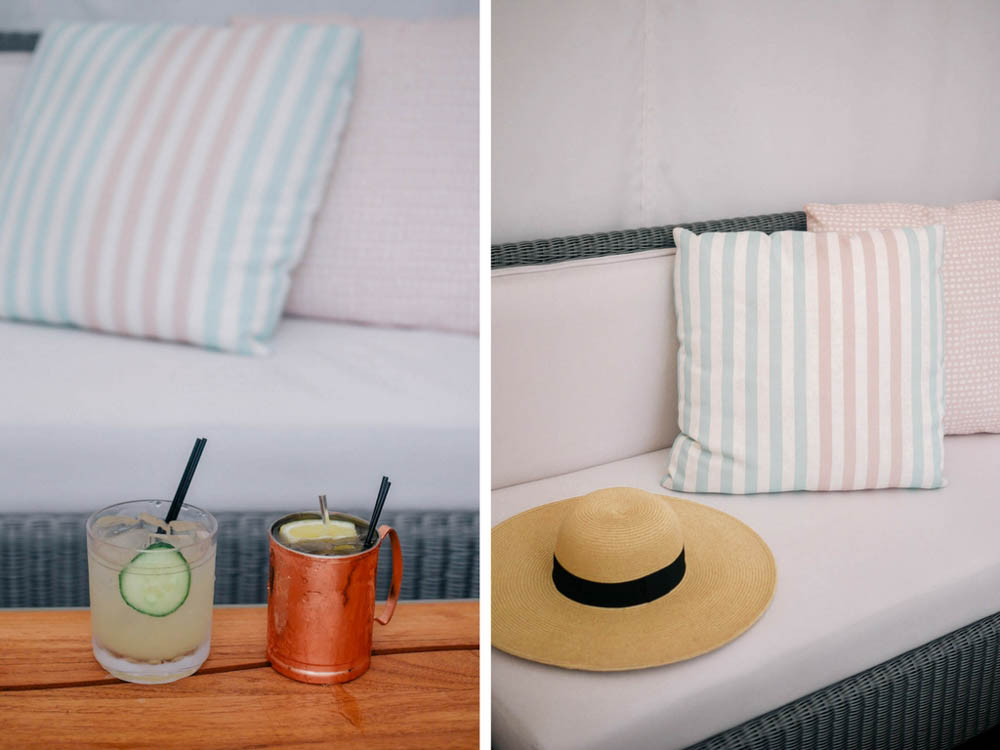 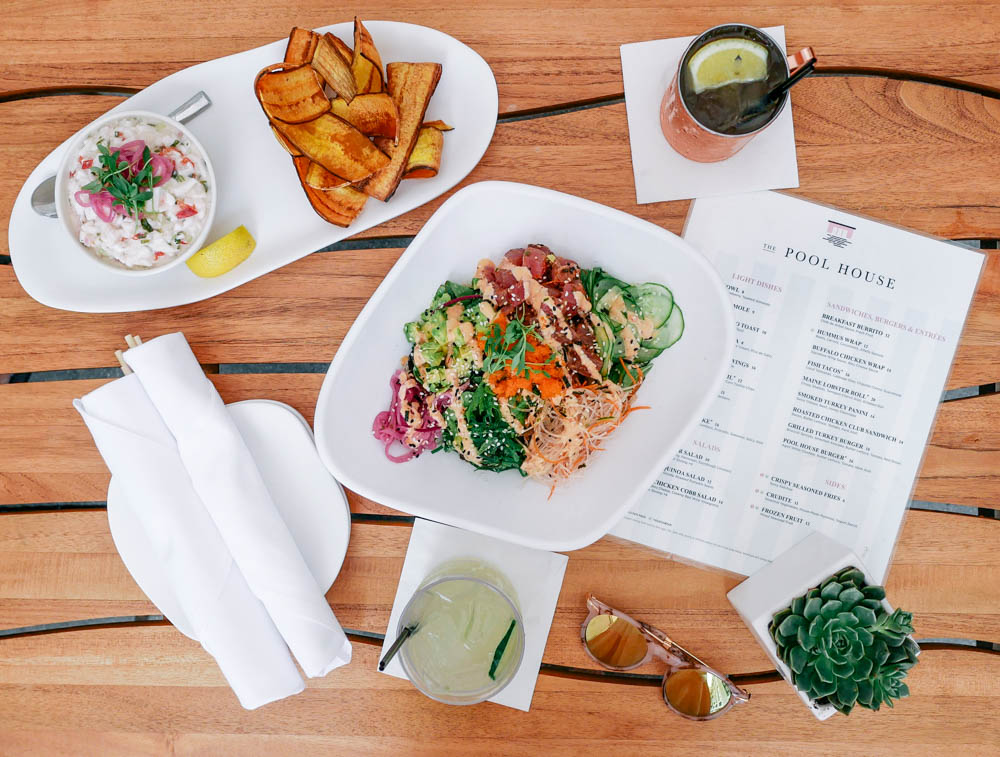 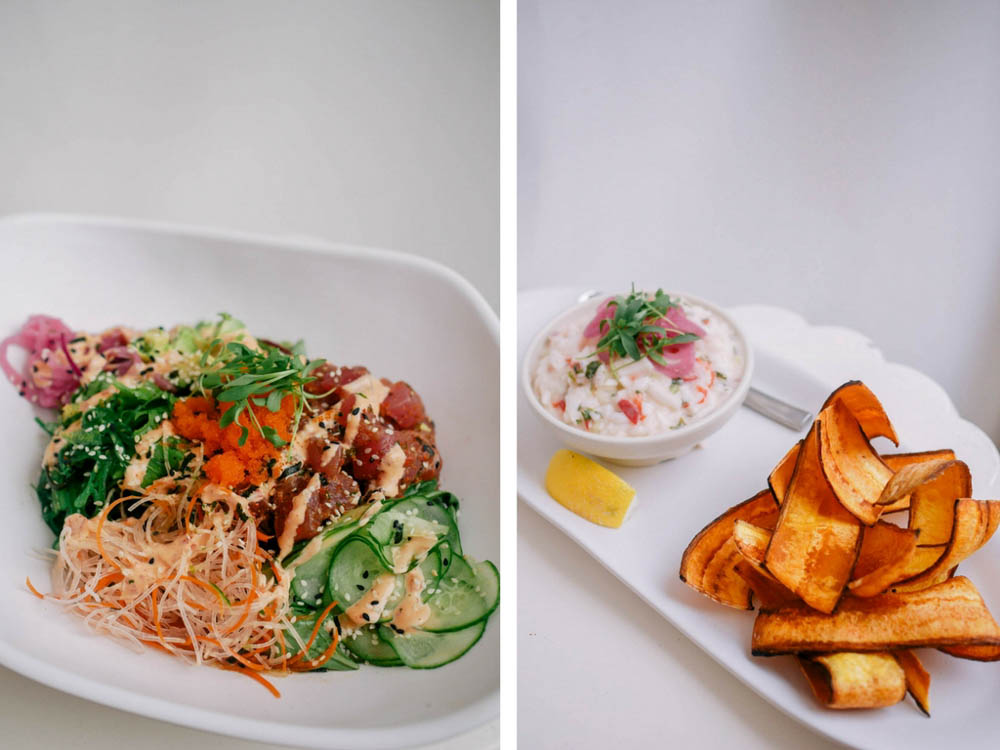 After dropping off our bags in the room, it was time to hit the pool! The Pendry’s gorgeous rooftop pool not only invites you to stay awhile and soak up some rays, but also has an incredible restaurant serving up delicious and colorful cuisine.

The Pool House offers a selection of summer-esque cocktails and light, fresh food. The Pablo Chacon cocktail was calling my name, with Don Julio Blanco Tequila + Cucumber Essence + Jalapeno + Cilantro + Lime. For food, we opted for the Coconut Ceviche with Plantain Chips (vegan!) and the absolutely-to-die-for Big Eye Tuna Poke Bowl. I can not think of a more ideal poolside lunch! The Pool House is also open at night with happy hour on weekdays from 5-7pm.

We dined in our cabana and enjoyed the beautiful San Diego weather!

BOOK WITH PASSPORT TO FRIDAY & RECEIVE $100 HOTEL CREDIT WHICH CAN BE USED AT THE POOL HOUSE! 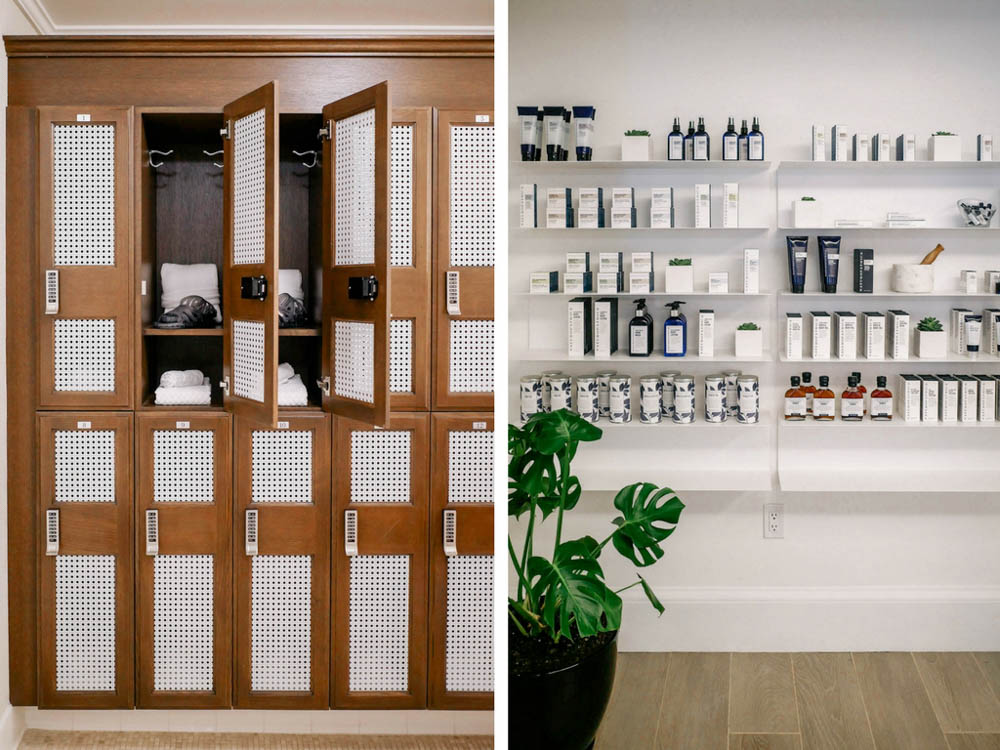 There’s nothing better than a great spa treatment to make you feel like you’re on vacation, so we booked appointments at Spa Pendry. I chose the Sea Oxygen Brightening & Restorative Facial which was both relaxing and informative (I learned so much about my skin!) This facial made me vow to treat myself to facials more often – my skin felt amazing afterwards! Prior to our facials we lounged in the relaxation area and sipped on skin rejuvenating tea.

BOOK WITH PASSPORT TO FRIDAY & RECEIVE $100 HOTEL CREDIT WHICH CAN BE USED AT SPA PENDRY! 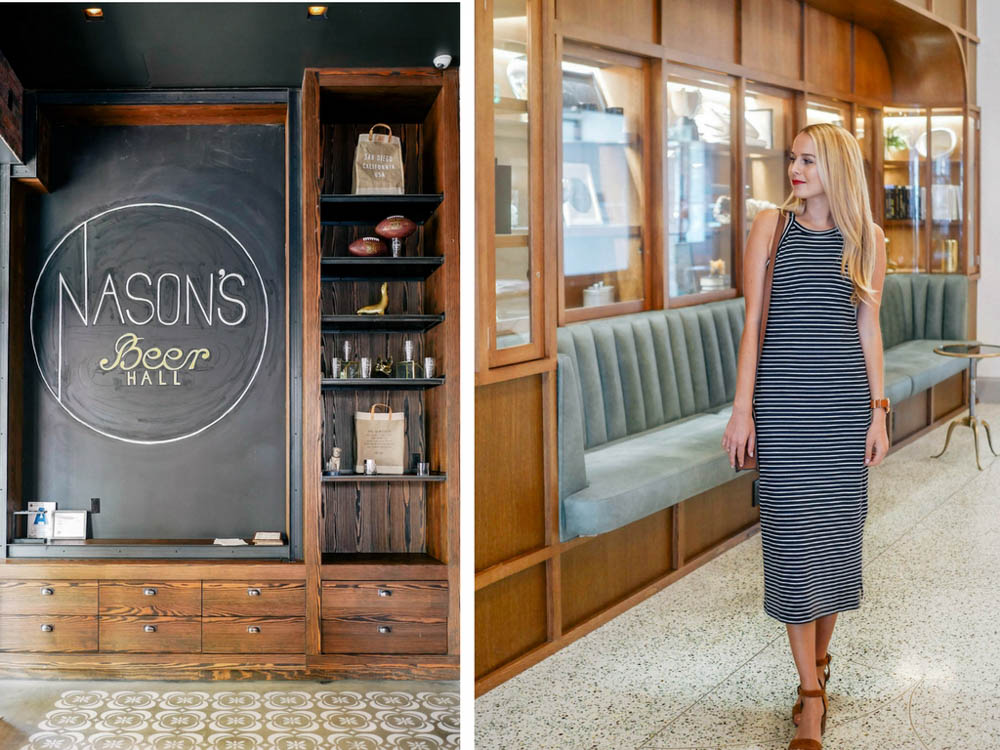 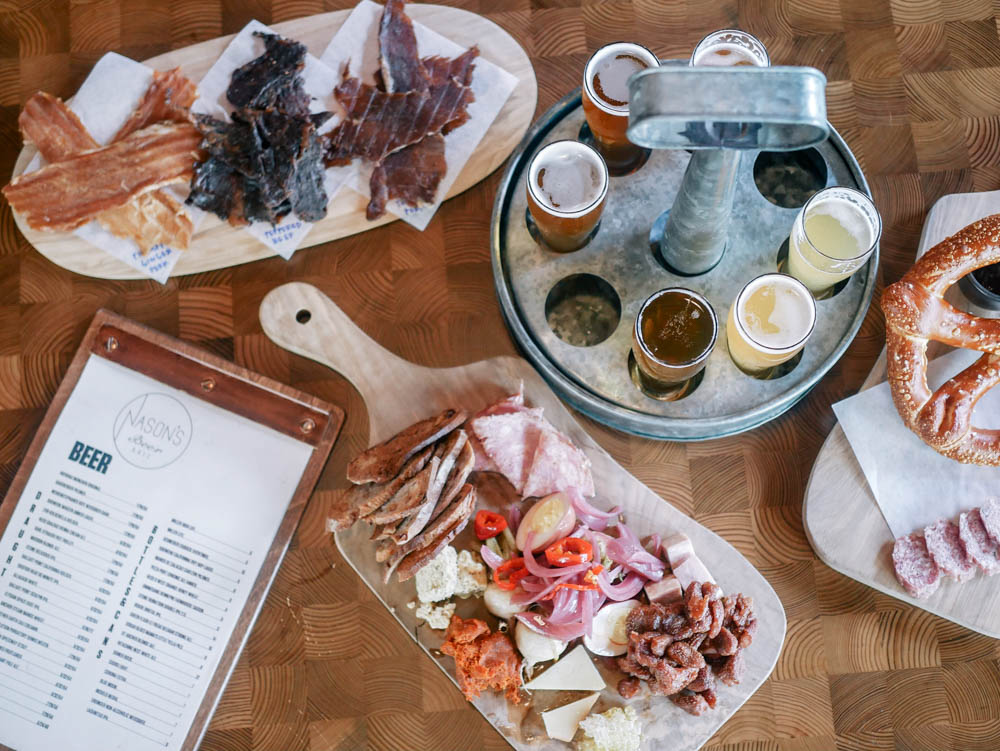 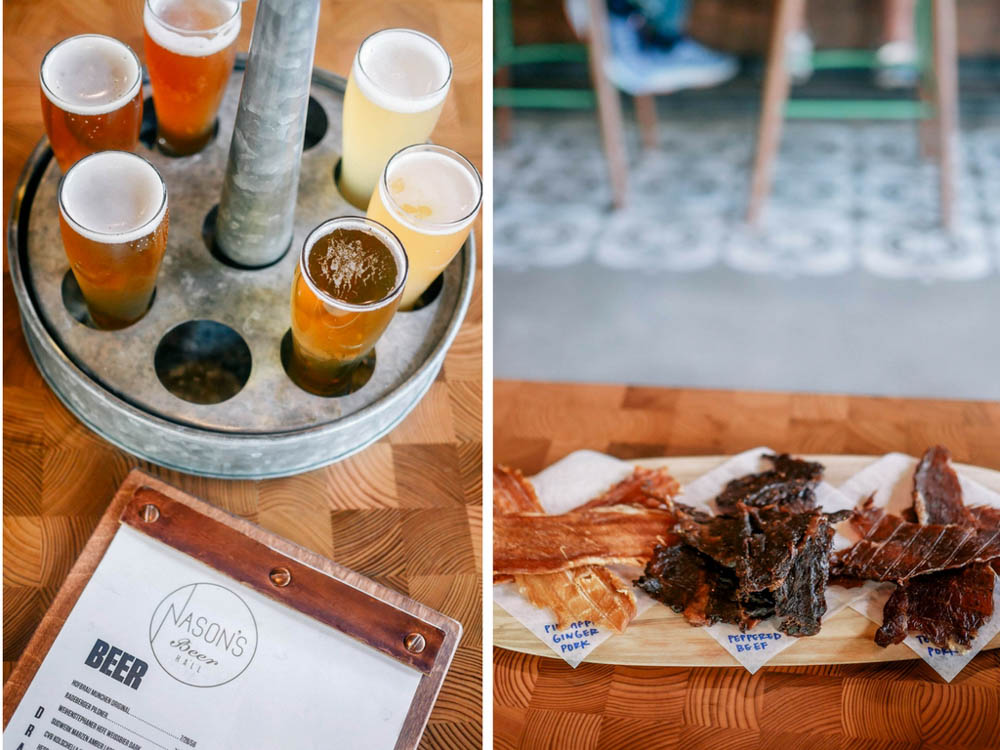 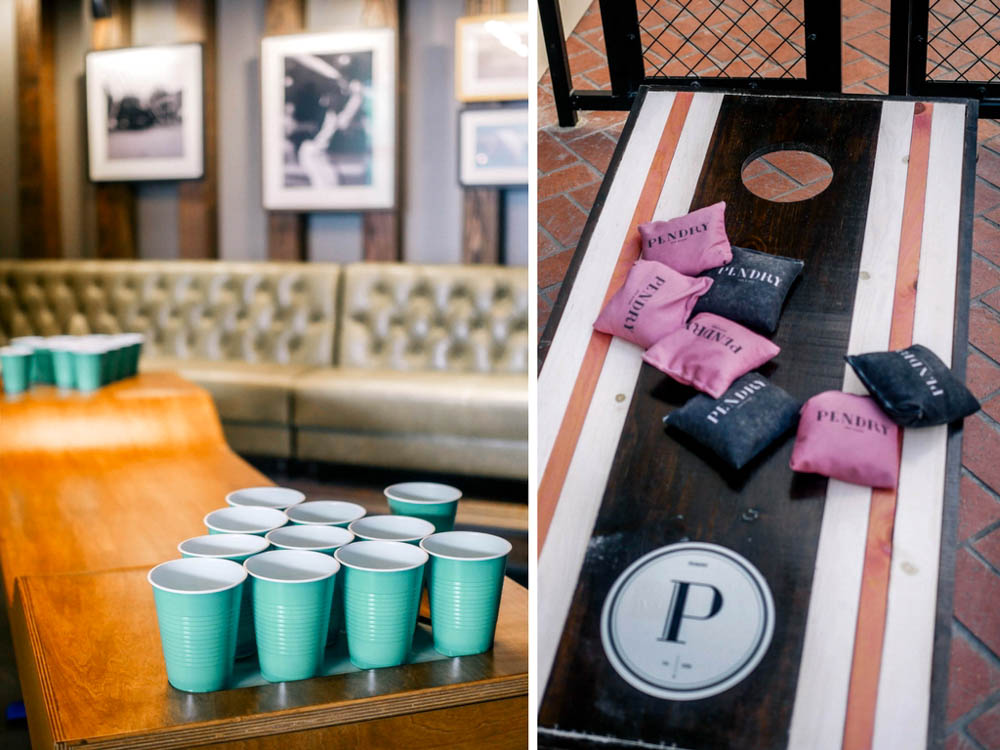 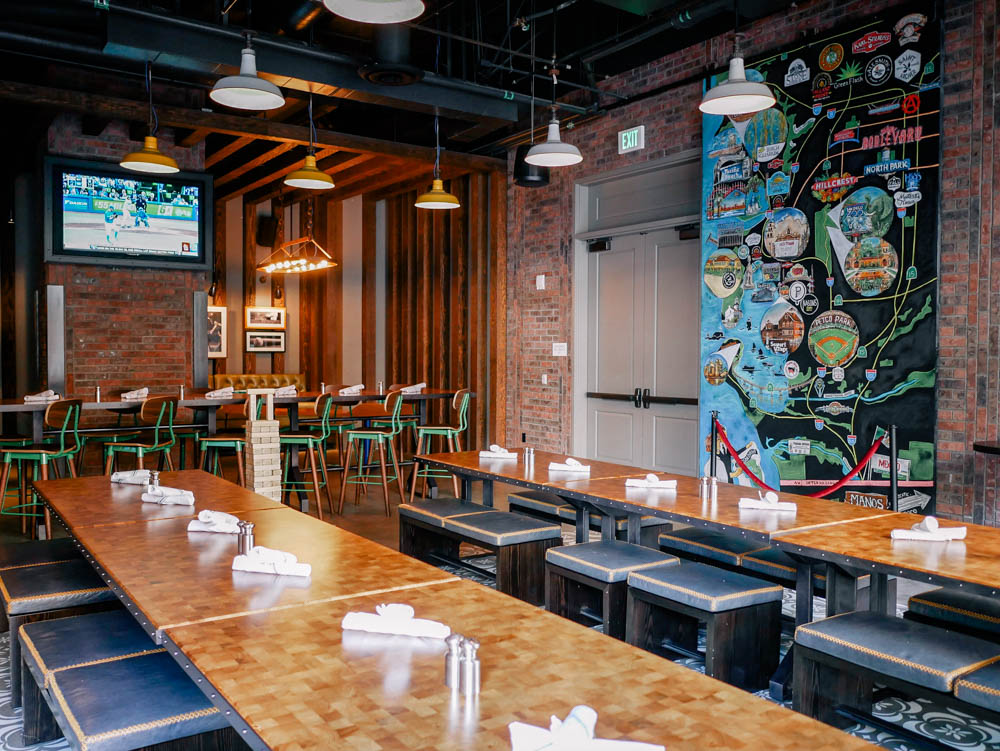 Since The Pendry has so many great dining & drinking venues, we decided to do a “dine-around” at each spot in lieu of a traditional dinner. We decided to start at the most casual of the bunch, Nason’s Beer Hall.

It’s no secret that San Diego is known for their craft beer scene, and Nason’s plays off this with a huge selection of both local and international beers. We shared a flight of a mixture of both and ordered some of their upscale bar food to nibble on. One of the most unique items on the menu was the Jerky Sampler in which we got a sampling of pineapple ginger pork, teriyaki pork, and pepper beef jerky. We also had the House Made Soft Pretzel and Artisanal Meat & Cheese Board. Beer not your thing? There are plenty of craft cocktails and wines to keep you satisfied.

I couldn’t resist walking into the beer hall and checking out the games – cornhole, beer pong, and more!

BOOK WITH PASSPORT TO FRIDAY & RECEIVE $100 HOTEL CREDIT WHICH CAN BE USED AT THE NASON’S BEER HALL! 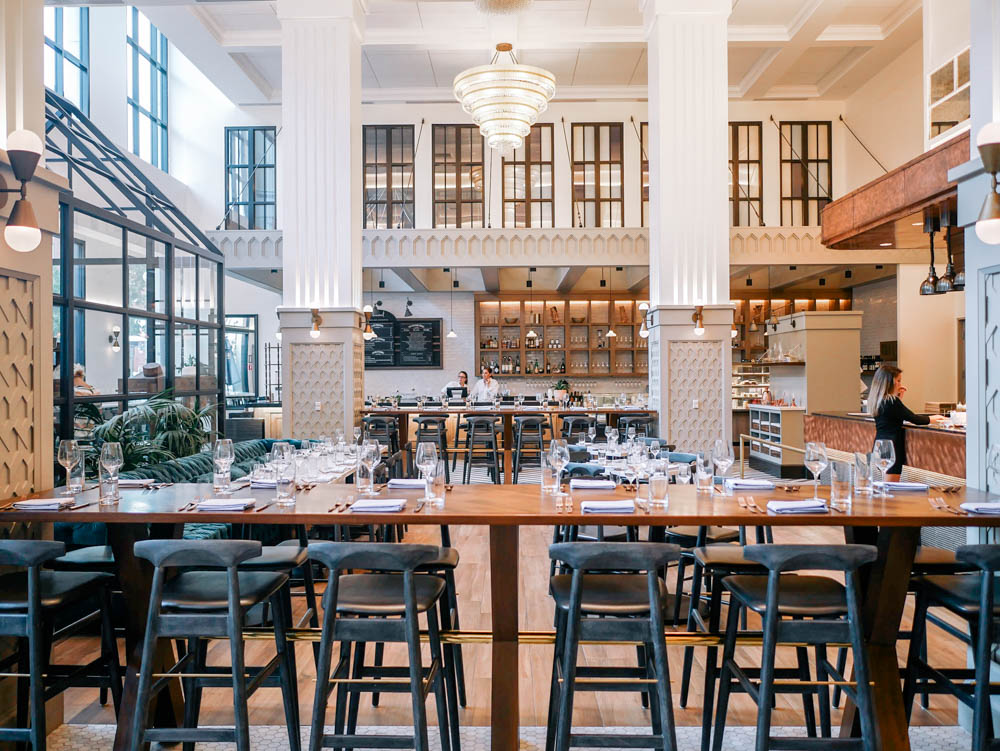 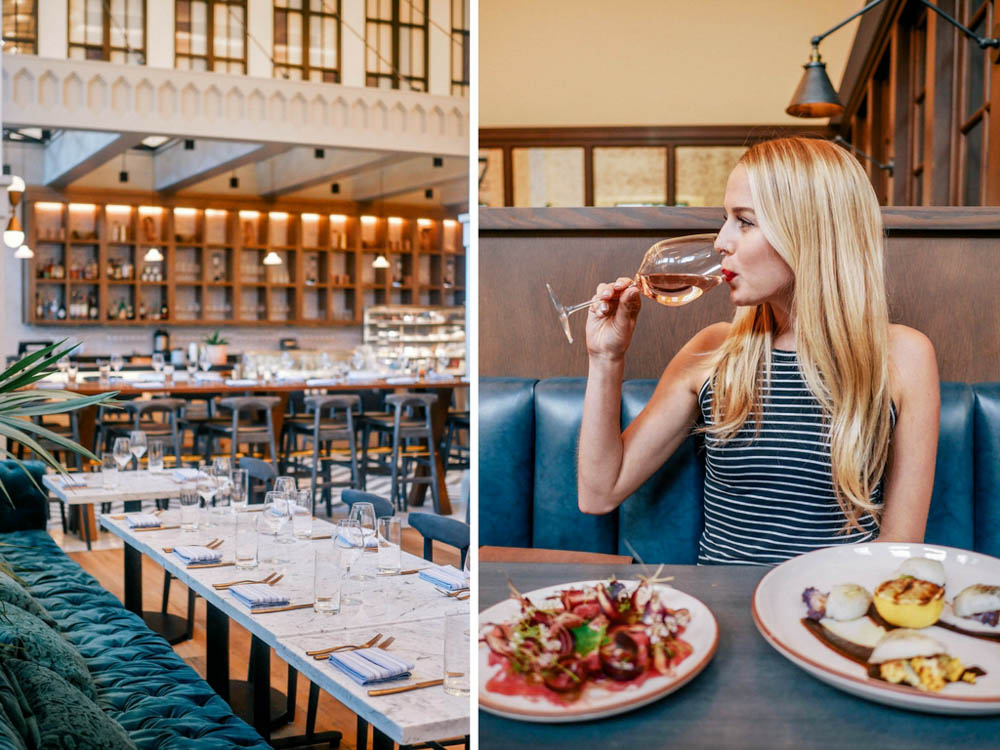 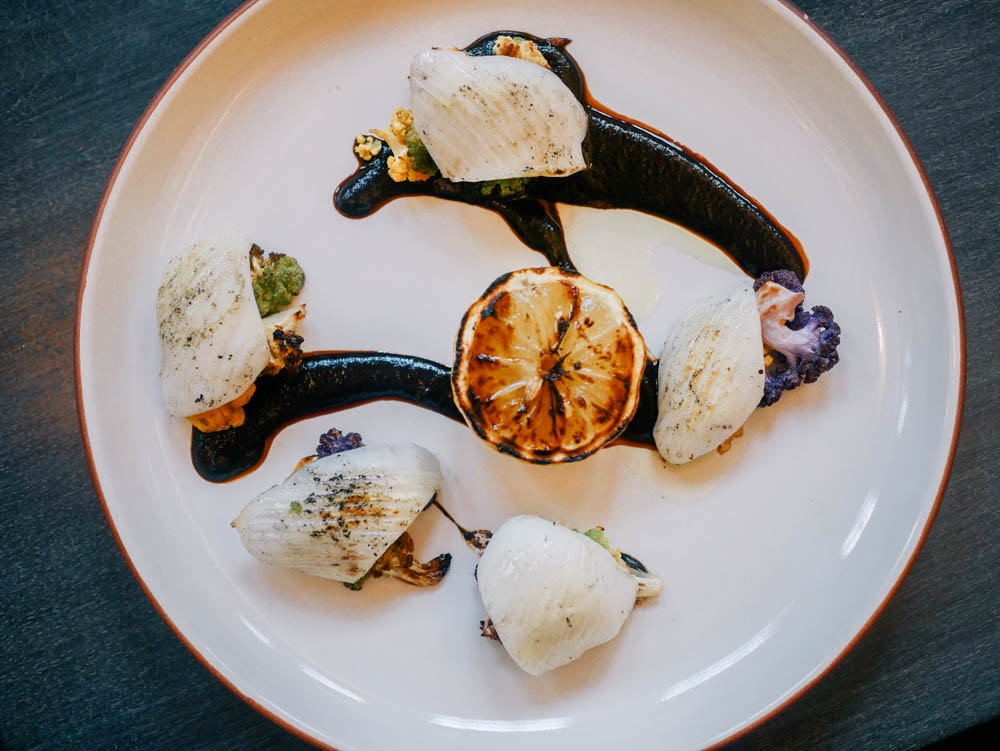 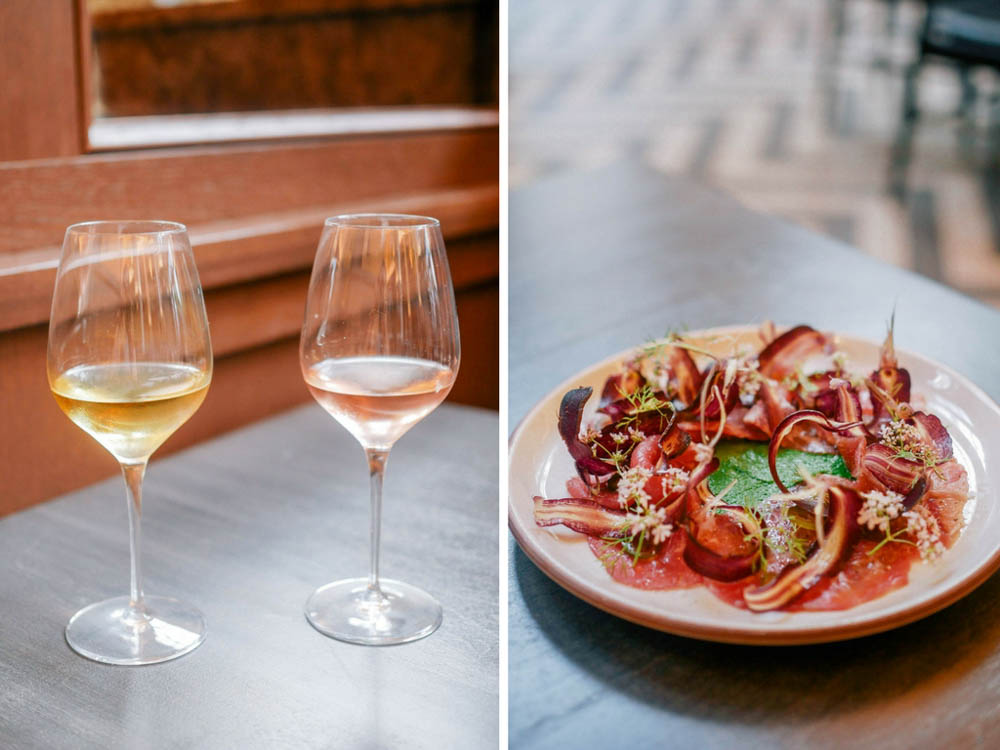 Our second dining stop of the evening took us to Provisional. Provisional’s space is equally as stunning as the rest of the hotel, with tall ceilings and ample seating areas. When we visited The Pendry Provisional was open for dinner, but it is now currently just open for breakfast and lunch. Regardless, it is a great place to get an early afternoon glass of wine and fresh cuisine – (think Chopped Kale Salad, Farro Grain Bowl, Truffle Pizza, Porchetta Cuban Sandwich, Brussels Sprouts Foster, and more).

In a rush? They also have a cafe menu for to-go items! 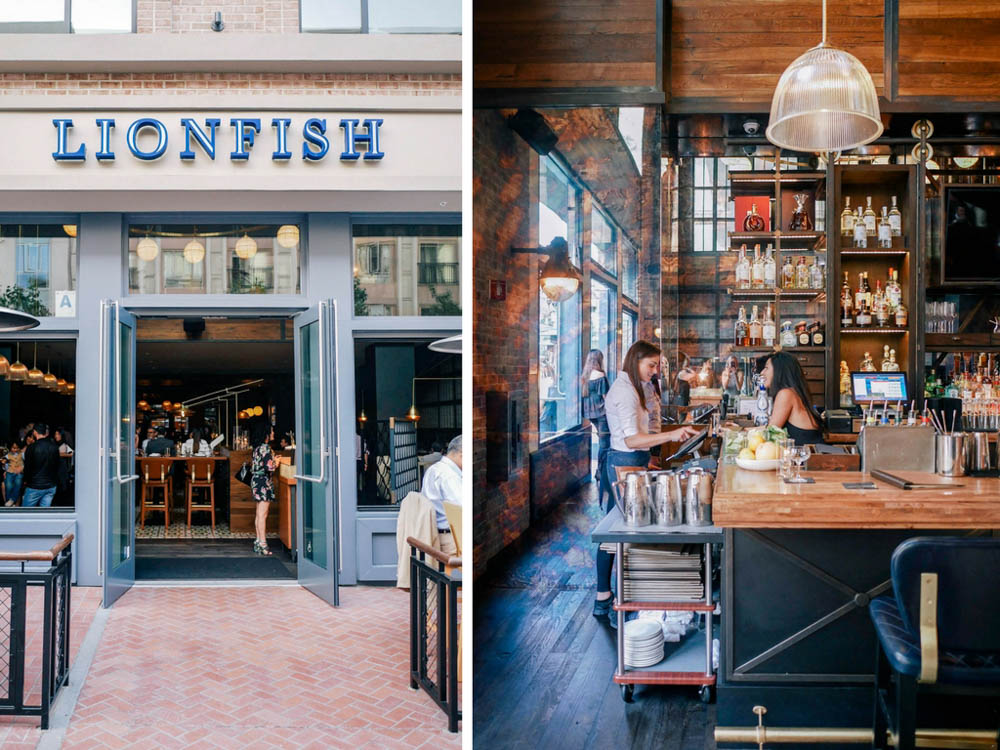 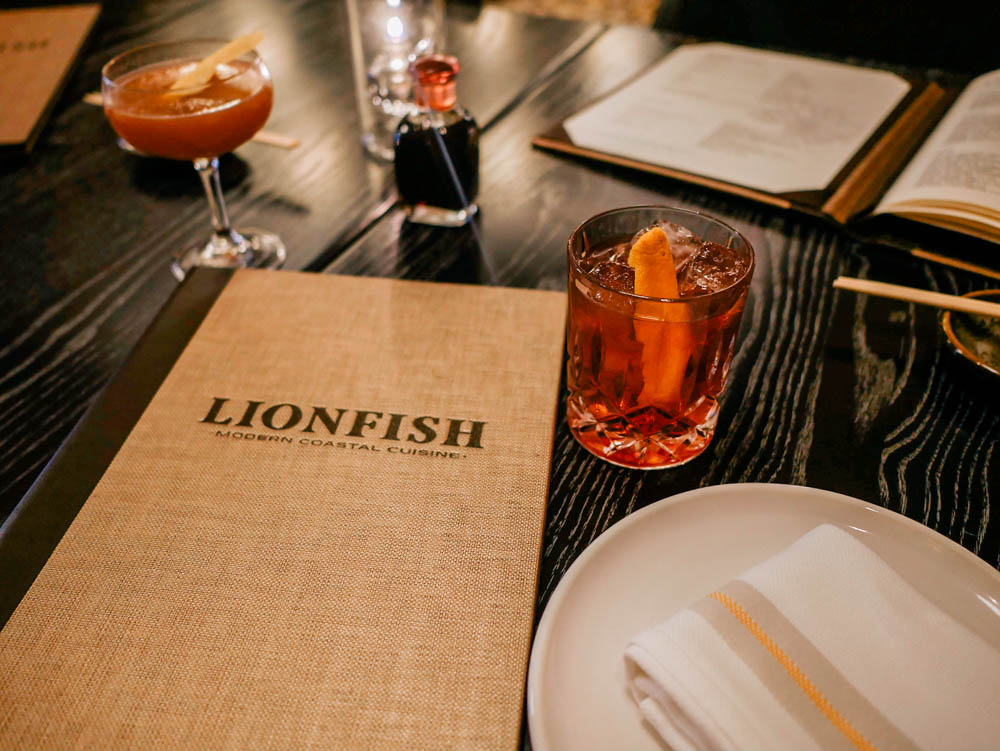 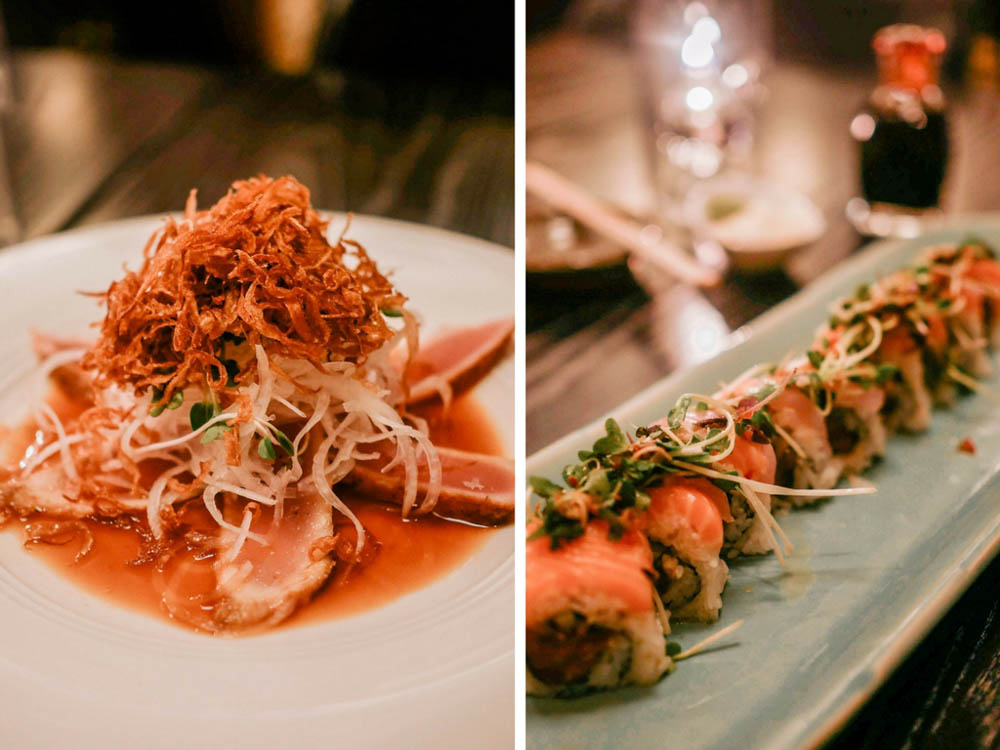 We ended our evening dine-around at Lionfish, which is the star restaurant at The Pendry for dinner offering seasonally driven modern coastal cuisine and a strong craft cocktail program.

Thoroughly impressed by the cocktail menu, I had a hard time deciding but finally settled on the Smokin’ In The Silent Theatre with Espresso Infused El Silencio Mezcal Espadin + Cappelletti Vino Aperitivo + Cocchi Dopo Teatro Vermouth Amaro + Orange Oil. For our last course of the dine-around evening, we went with the Tajin Seared Albacore starter and Golden Boy sushi roll.

Let’s just say, we almost had to be rolled out of there because we licked our plates (and drinks) clean – it was that good!

BOOK WITH PASSPORT TO FRIDAY & RECEIVE $100 HOTEL CREDIT WHICH CAN BE USED AT LIONFISH! 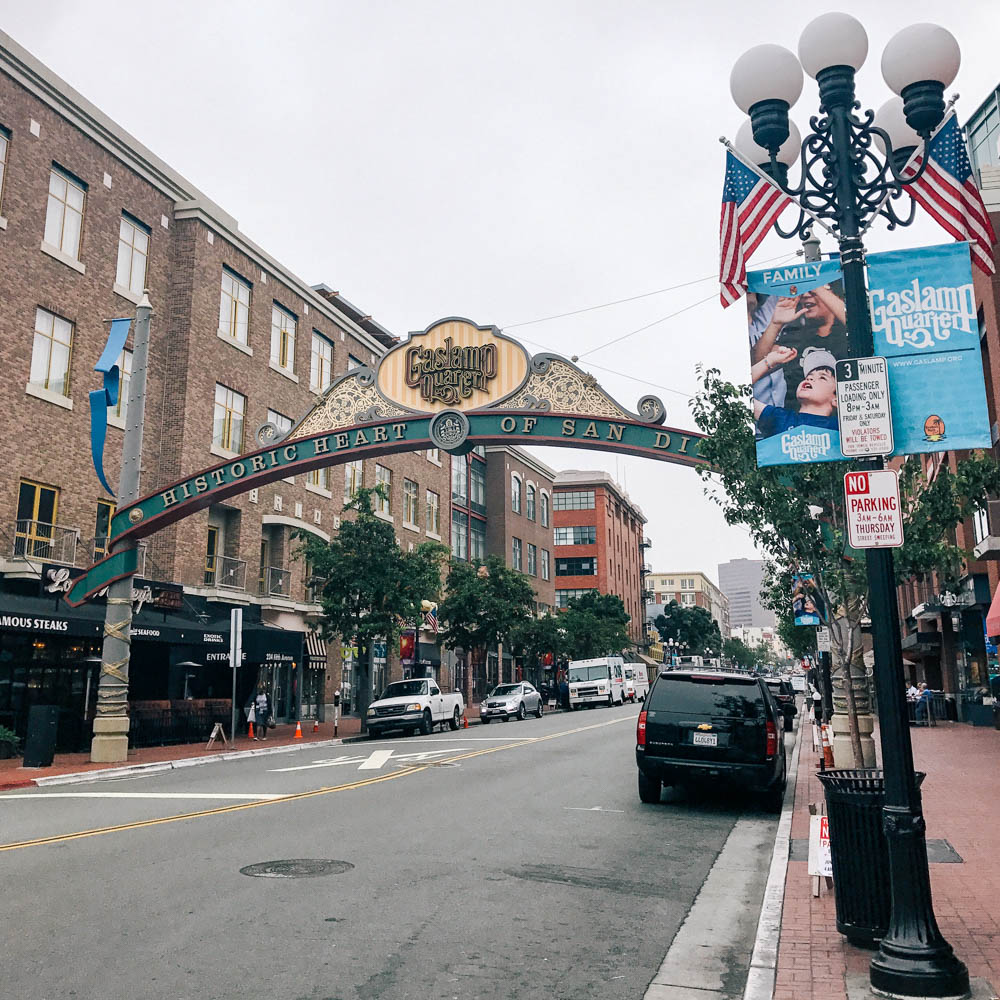 Walking is one of my favorite ways to start the day – get some fresh air and refresh the mind! There’s so many different areas you can walk to from The Pendry whether that be around Gaslamp Quarter, down to the Bay, up to Little Italy, and more. Another perk of being in the heart of all of the action is that there are many fitness studios nearby if you’re looking for for more of a workout! 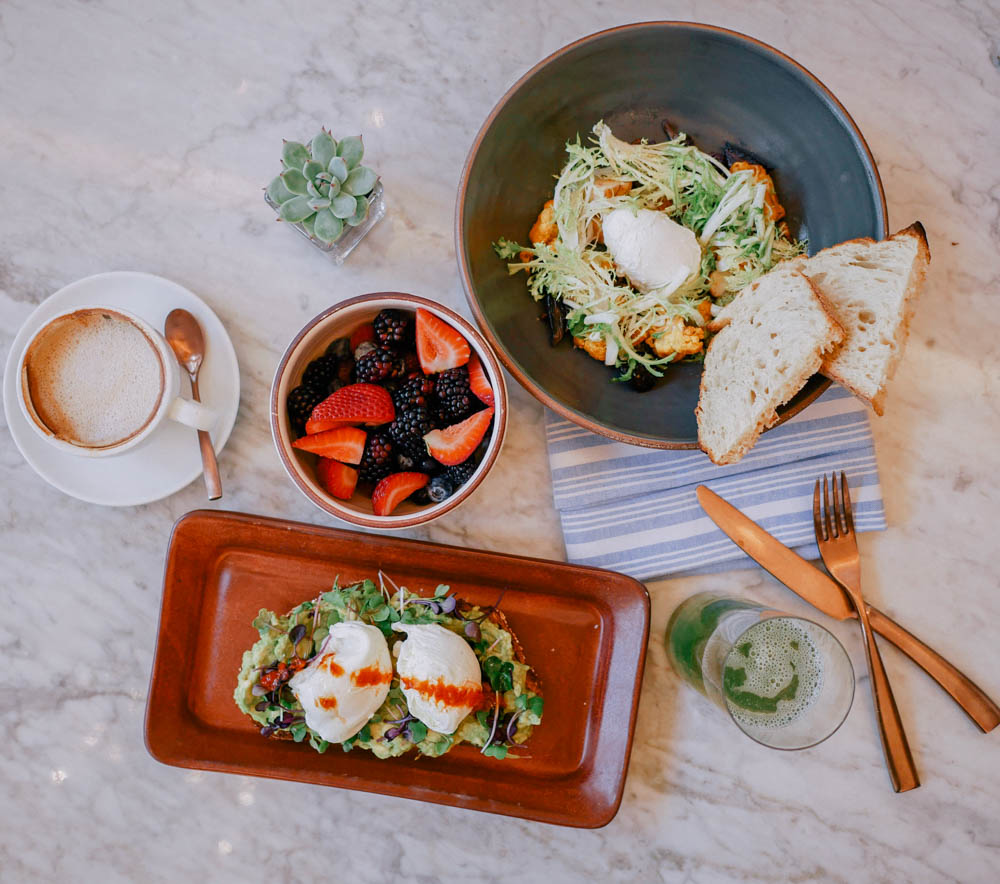 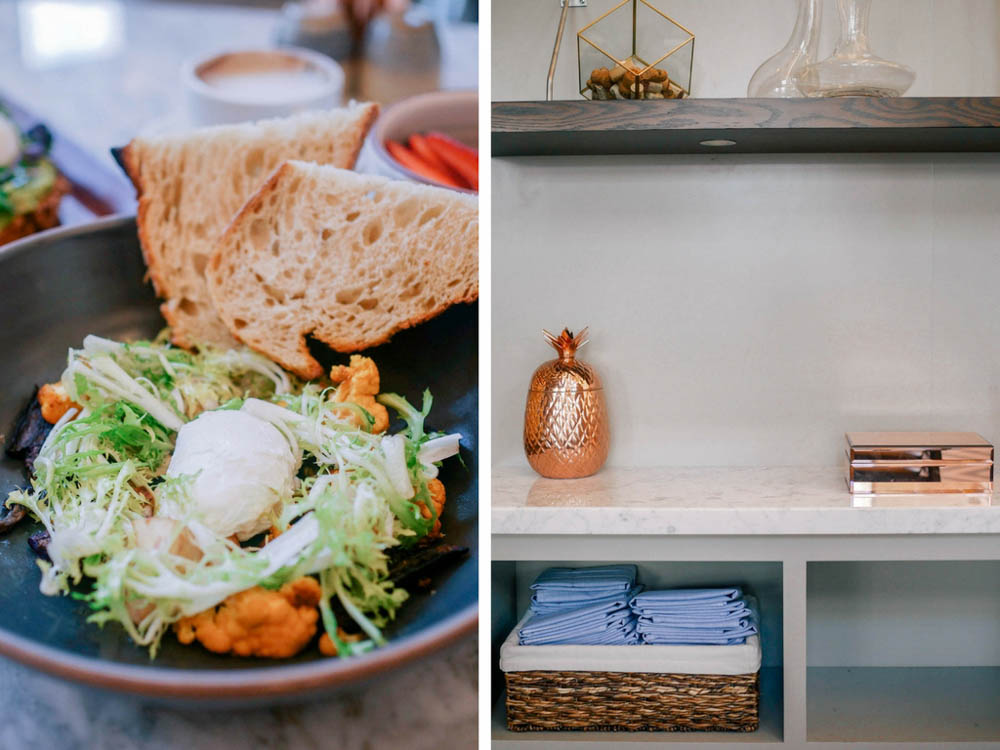 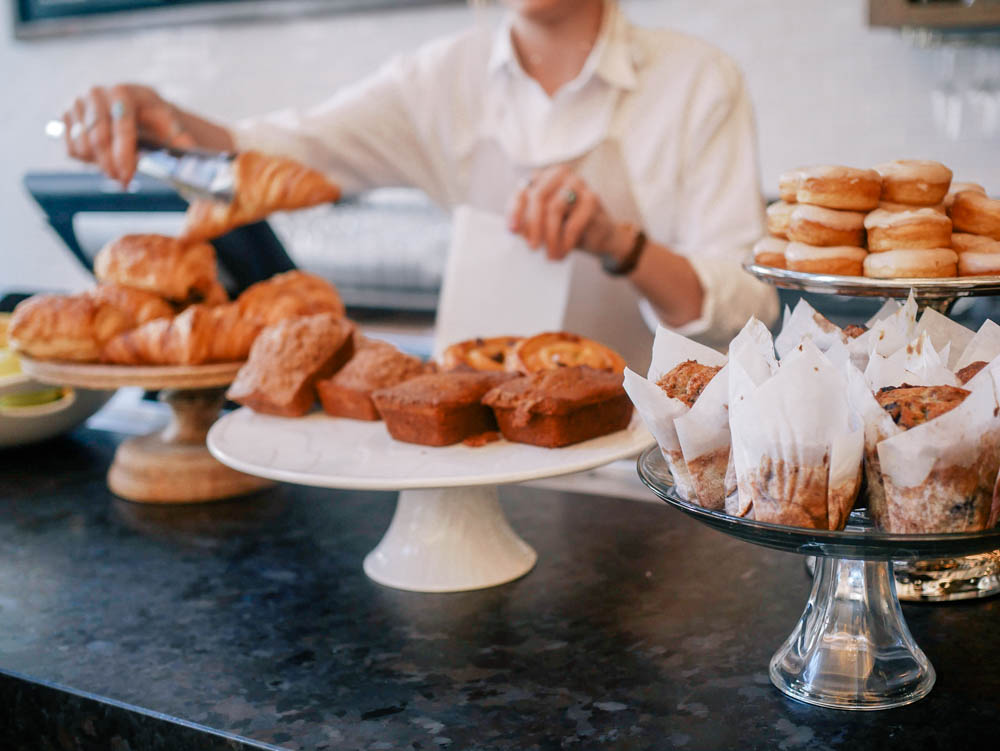 Before checking out, we headed back to Provisional for breakfast and were not mad about it one bit! We chose to start with almond milk cappuccinos and green juices and ordered the Avocado Toast and Breakfast Salad with a side of berries as our entrees. Y’all know I am a sucker for a good avocado toast, and this one was DELICIOUS due to the thick multigrain bread, large chunks of avocado, and perfectly poached egg. The breakfast salad’s roasted veggies stole the show though with their gorgeous colors and multitude of flavors.

BOOK WITH PASSPORT TO FRIDAY & COMPLIMENTARY DAILY BREAKFAST FOR TWO!